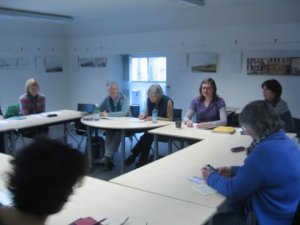 One of the festival themes was ‘Legacy & Place’.

It was like a Hebridean holiday: you bumped the same people several times a day. Andrew the drystane-dyker poet; Enid who wrote so movingly in your workshop; Annie the young journalist; Rebecca whose poems graced the walls of the room used for workshops,  complementing paintings of the peripheral made by her collaborator Anna. People you knew from Edinburgh; Canadian writers you just met for the first time; cheerful StAnza staff.

Weather enclosed and defamiliarised the Fife town and seemed to intensify and brew the creative and social activity.  The wynd where  I took shelter  from the landfall of an Orcadian wind suddenly felt like a Stromness pend, and was filled with kent faces. I was happily disorientated. When the visibility improved a little on Saturday, I walked along The Scores to the West Sands to ground and assimilate the many wonderful words I’d heard over the previous three days, from the voices of Gillian Clarke, George Szirtes, Ken Babstock, Chris Whyte, Erin Moure, Mark Doty, Jean Atkin and more. Offshore, in parallel, waves broke endlessly, uniformly, companionably from the still-near horizon. Up at the cathedral, I stepped over the remnants of low walls and was reminded of the cloistral ruins on the tidal island of Birsay, and every bit as cut off from the quotidian. The wind intensified; drove in a tide of Shetland vowels. Time to return to the warmth of StAnza’s replacement hub, the Town Hall, made resplendent with words, sounds, images and tactile textual objects, to see  the collaboration between Fife poets and Shetland craft makers, Farlin. Time to hear Walt Whitman and Marina Tsvetaeva echoing down the generations and across continents.

It wasn’t  unexpected that, meteorologically enabled or not, sounds and other senses from  the northern and western isles  found their way along the wind and waves and into my experience of the venues in St Andrews. It did however come as a surprise to me to be taken back to the Lake District. When Gillian Clarke spoke of childhood fear as a foundation for poetry in her compelling exploration of  Brythonic verse and the Welsh alliterative pattern cynghanedd,  she cited Heaney’s testament to the pervading power of early terrors.   I was reminded of Wordsworth’s assertion near the beginning of The Prelude that he was ‘fostered alike by beauty and by fear’, before embarking on his incomparable blank verse catalogue of childhood adventures and misdemeanours. When Erin Moure, in a dynamic workshop on revision, commented that ‘language can do more than we know’, I searched my memory for the source of his line ‘we feel that we are greater than we know’. And then Jean Atkin, appearing with Zoe Skoulding in the highly atmospheric vaulted undercroft at St John’s, read her poem about the old coffin path that connects Ambleside and Grasmere. I was back in my graduate school days, trying to impress American delegates at the Wordsworth Summer Conference whilst walking that same path on a visit to Rydal Mount, the Wordsworths’ home between 1813 and 1850. Or  earnestly studying early MS. drafts towards The Prelude at Dove Cottage, but waiting for the weather to clear so I could climb Helvellyn (a Cumbric place-name, incidentally, closely related to Brythonic). My supervisor was the late Robert Woof, director of the Wordsworth Trust, who tended to be there, rather than doing his day job across the pennines at Newcastle University. Since that time, the Trust, like the universities, has recognised the benefits of welcoming creatives alongside academics. Time to pay a return visit, perhaps.

But for now, thank you, Eleanor Livingstone and all the StAnza team and participants.